- Don't want to use a PC to control your Boss GT-1 ?
- Tired of twiddling knobs and pressing buttons to navigate the menus?
- Wanting to jump between patches fast - no matter how far apart ?
- Don't want to need a PC to load new patches into your GT-1?

Manage your Boss GT-1 guitar effects pedal from your phone or tablet with ‘GT1Man’ !!

See this video demo for a quick overview of the capabilities ... 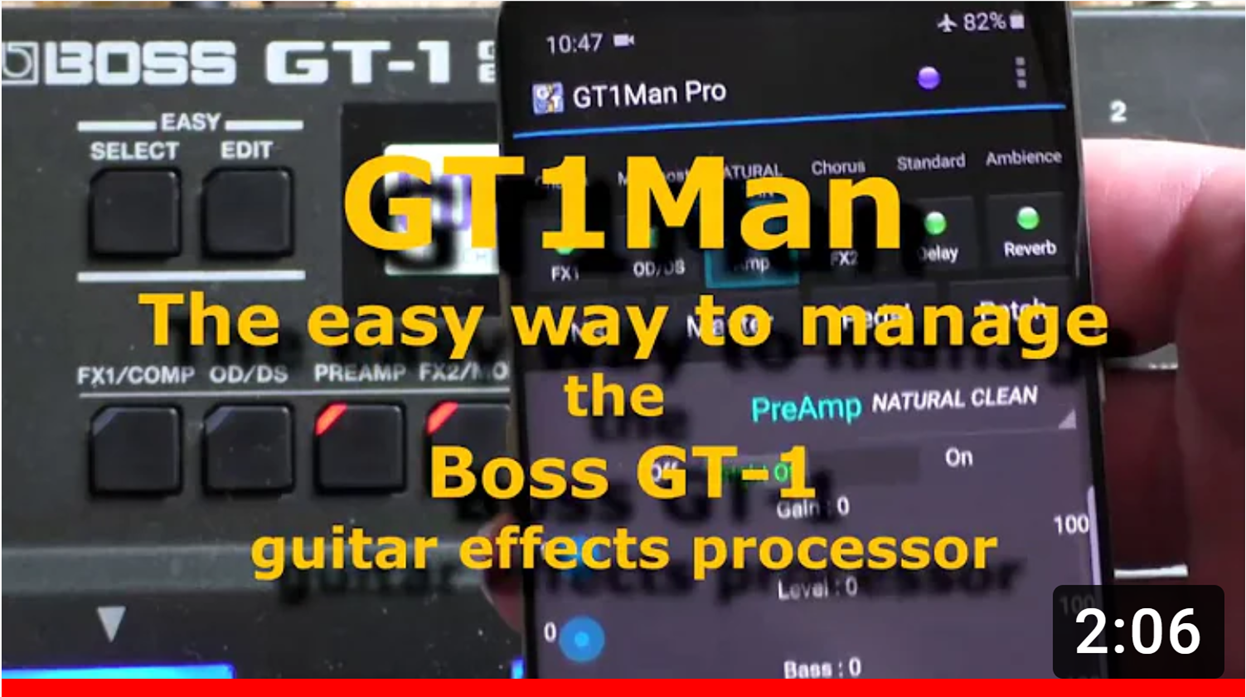 GT1Man connects to your Boss GT-1 guitar effects pedal via a USB cable. It allows direct control of most of the GT-1’s extensive features. Amp models, boost types, effects devices, can all be selected and set from your device (phone or tablet) to create your desired tone.

Tone Studio Library (TSL) files can also be loaded to the GT-1.

GT-1 settings can be ‘tweaked’ and saved ‘on the fly’ making GT1Man an ideal tool for the home guitarist, as well as for practice sessions, studio work, on-stage performances etc.

Bluetooth devices (eg foot switches) can be used to control the main features.

Set Lists of songs can be loaded which will ensure that the correct patch is loaded for each song as you progress through your performance.

Feature Overview:
- Control your GT-1 from your phone or tablet
- Provides fast access (usually one click) to most GT-1 features & functions
- Change effect settings quickly & easily
- Navigate between different effects with just one or two taps
- Automatically reads all 99 patch names/numbers from the GT-1 and allows fast access by number or name
- Almost instantaneous switching between GT-1 patches
- Create, save and load tones ('patches')
- Load patches (including TSL format to the GT-1) without a PC
- Fast patch loading
- Change chain order and easily save your favourite arrangements for fast reloading
- Use set lists to easily select song / patch combinations for live performances
- Interface designed for studio / performance use
- Suited to both the hobby/home guitarist and the performing musician
- Full Android 11 support ('scoped storage')
- All GT-1 devices and effects are supported.
- All parameters for a given effect are available on one screen. Effect types can be quickly and simply changed from a 'drop down' list
- A connection status light ensures that you know your GT-1 is still connected correctly.
- All changes made directly on the GT-1 (knobs) are reflected on the GT1Man screens and vice versa.

- Ability to change any of the GT-1's effects (eg FX1/2, Delay, PreAmp etc) as if you were turning the physical knob on the GT-1.

- The current settings (tone) can be saved to a specified GT1 user patch slot (eg U33), or as a named patch saved on your phone/table, or both of these.

- Supported patch file formats are both the proprietary EatonPLan format (with file extension '.kat') (these are quite small and load quickly), and Boss Tone Studio Library (TSL) format (file extension '.tsl') (these are larger, more comprehensive, and take longer to load).

- Can read all 99 user patch slots and store the name of the associated patch (stored in a pseudo patch file ('.gtp). These can be used to perform fast patch switching between any of the 99 patch slots.

- Automatically creates ordered lists of the current GT-1 patches. Two lists are created - Patch-Number Order and Patch-Name Order. The lists can be used to select the patch to be switched to.

- Fast patch switching using the automatically created ordered patch lists. Any patch can be switched to with a single finger tap in less than a second.

- Loading multiple TSL patches from a TSL Library file into a corresponding number of GT-1 slots.

- Back up and restore all 99 GT-1 patch slots using the multiple patch read / load feature.

- Use a Bluetooth device (eg foot switch) to turn specific settings on/off. The assigned characters to be associated with each of the settings to be controlled can be specified from the options menu.

- User created free form 'Song Notes' can be viewed within the app. This could be used to show chord charts, guitar tab, song lyrics etc. Html-like formatting can be used.

Connection Requirements:
In order to connect your phone or tablet to your GT-1 you will require:
- A Boss GT-1 guitar effects processor
- A USB cable suited to your GT-1 (often sold as USB 'printer' cables)
- An OTG cable adapter
- Your Android device must support OTG / ‘Host Mode’ (most modern phones do)

Patches:
You can save the current tone as a named patch on your phone or tablet. Patches can subsequently be re-loaded to your GT-1 simply by tapping on the patch file. The number of patches that can be stored is limited only by the available storage on your Android device.

SetLists:
SetLists of songs, in order of performance, can be created - with each song ‘linked’ to the associated patch. As each song title in the list is tapped the corresponding patch is loaded into the GT-1. Great for live performances.

Related Apps:
There are two apps which are designed to work with GT1Man - KatanaSets for setlist management and KatanaSync for data back-up and restore.